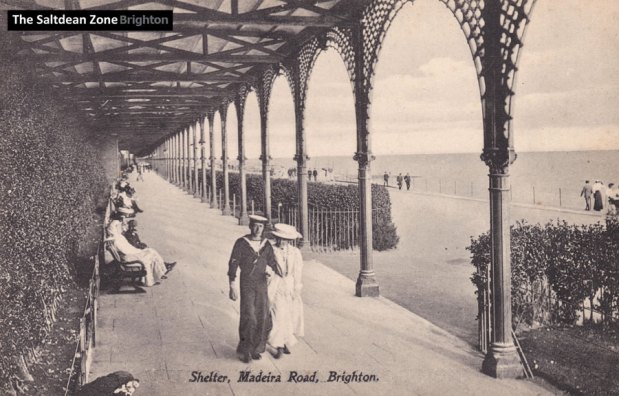 What has Oscar Wilde got to do with the Madeira Drive green wall?

Bear with. Madeira Road was opened in 1870, forming a new promenade along the bottom of East Cliff, and connecting people from the wealthy Brighton and Kemp Town with the seaside. Our new theory is that it was named ‘Madeira’ after the island’s greenery.

One man who did much to popularise Madeira as the ‘garden isle’ was Sir William Wilde…you guessed it…father of Oscar. An excellent botanist, he wrote of the vines and terraced gardens, praising the ‘hothouse of the open air’ that he grew to know on his visits from the late 1830s. Madeira became popular with Victorian visitors through the 19th Century for much the same reasons that Brighton did – for the health giving properties of seaside living and recreation, as well as its luxuriant gardens.

Madeira Drive green wall was planted in 1872, and we expect that it was always part of the vision of for Madeira Road to establish vegetation to soften the hard cliff and new road, and encourage people to spend time there.

A later photograph, probably about 1872/1873. By now, the Aquarium had been built, on the site of the esplanade, and the few hesitant steps towards the construction of Madeira Drive had commenced. Note the long line of sapling trees and the ladies’ bathing machines.
Both are, of course, recent copies of old stereoscopic photographs.

So Madeira Drive Green Wall is extra well named…our little slice of the ‘garden isle’ on the Sussex coast.

And what of Oscar? A frequent Brighton visitor, and sometime Worthing resident, Oscar lectured in the Pavilion in 1884, avoided long walks, and crashed his cart into the railings of Regency Square in 1894. I don’t know that he ever saw the newly established saplings of Japanese Spindle of Madeira Road…but I hope that he did.

With thanks to Derek Wright for the prompt to research this piece.