Heritage England have regraded Madeira Terrace as a II* structure.

The nerds amongst you will enjoy reading the citation. A few headlines for others:

The Madeira Drive green wall gets a special mention:

“Earlier, between 1830 and 1833, the natural East Cliff at Brighton was made good by the application of a concrete covering, and was then planted up to achieve a green wall which is now believed to be the oldest and largest of its kind in Europe, with over 100 species of flowering plants recorded.”

Now to save it…

Found in a second hand shop…a framed print of how Madeira Road could have developed. By architect John Johnson, and published in The Builder, May 5, 1883, the ‘improvements’ show features that are still in place, and many now lost or never implemented.

Surviving still – albeit with sections lost over the years – is the ‘green wall’, running from the Chain Pier (now the sun terrace) to Paston Place. Banjo groyne is there. There is the idea of a lift from Marine Parade (the print shows two lifts) – now part of the Concorde 2 of course. There were gardens and squares in Kemp Town. There were extensive lawns and bandstands on Madeira Road. Some of these were built and maintained for many years, but have all now been lost. And there was planting in the road – hedges close to the Madeira Terrace, which this architect hadn’t envisaged.

Obviously not taken forwards are the grand looking hall to the east of the Chain Pier, and the car free streets!

Questions remain. Was there an architectural competition, and was the winner the Council’s own Philip Cawston Lockwood who imagined the Madeira Terrace? Whose idea was it to establish the green wall? And what is today’s vision for the future of East Brighton seafront?

The many green walls at the New England development near Brighton station are – on the whole – thriving.

Great to see such healthy green walls, and to experience how they soften the streetscape.

New designs have been published for Madeira Drive – attempting to address the restoration of the Victorian arches whilst regenerating the seafront between the Pier and Marina.

This is the latest in a number of ideas – see Michael Doyle’s and the Council backed ideas of Sea Lanes and the ‘Lockwood Project’ that aims to retain and enhance the historic green wall.

Paul Nicholson (Chalk Architects) favours luxury flats and a park at the level of Marine Parade modelled on the New York High Line.

Clearly it would mean the end of sections, at least, of the historic planting and established biodiversity on the Madeira Drive Green Wall, but to remain open minded it may create additional valuable habitat and open space for people and wildlife.

Whether this will remain a fanciful sketch, or a vision fulfilled, remains to be seen. Building Green will want to be involved if this gets off the drawing table.

Home to unique Victorian engineering, major public events and a great beach, it’s also the greenest part of the seafront in Brighton & Hove, and is home to rare ‘vegetated shingle’ habitat and the longest, oldest green wall in the country.

For that reason we think it’s worth special attention, and we will soon post a special page dedicated to this miracle mile (and a bit).

In the meantime, here are some more old photos along Madeira Drive…showing the historic development of the seafront, the planting, the tearooms and lift, and the elevated ‘Madeira Terrace’.

Looking east – the Chain Pier, bathing machines and Victorian traffic. You can clearly see planting established on the cliff face. Dated 1890 but Shelter Hall, built 1890, not visible so this is probably earlier

Looking west towards the Chain Pier, with the railway laid out. Japanese spindle trees look around 12 feet tall here. 1883? Lawns were laid out in 1884 and are not visible here. Railway established 1883

The Aquarium, Brighton 1889 – 1896, again with the Chain Pier in the distance and plants well established on the East Cliff. Part of the Gravelroots UK Vintage Trail

Madeira Lift showing the lawns in front and the planting climbing behind the terraces.

Planting along the East cliff – showing the Concorde tearooms but the rest of the elevated walkway not yet built. Less shingle, and loads more sand and reef at low tide. 1890

Early planting on the front of Sussex Square, Duke’s Mound – the walls recently cleared and replanted by the Council. After the enclosed Esplanade was opened to the public in 1952

A timeline of the major events in the development of Brighton’s seafront – specifically, Madeira Drive in Kemptown.

Note there is now a separate page on Madeira Drive on this website with photos and a longer history.

I’d welcome corrections, additions and comments. A book is a future possibility!

827 Sussex annexed by Kingdom of Wessex. ‘Beorhthelm’s Farm’ recorded, and was a landing place for boats with villagers and smallholders.

1086 Domesday book records Bristelmestune, a settlement of three manors on the modern site of Brighton
1290 – 1340 40 acres of ‘lower town’ old fishing village lost to sea level rise
1640s Sea level rise threatens fishing village on cliffs above foreshore
1514 Fishing village Brighthelmstone burned to ground by French
1703 – 1703 Great storms destroy Brighton lower town and most of foreshore. Cliffs along Brighton are composed of ‘Head’ (or ‘Coombe’) drift, an easily eroded deposit of chalk rubble and flint with a proportion of clay and sand. In front of the Old Town the cliffs were known as Middle Street Cliff, Ship Street Cliff, Black Lion Street Cliff and the East Cliff, and were separated by gaps with steep paths to the beach which people used to carry goods. Below the cliffs was the foreshore, a mixture of sand, shingle and chalk reef of the kind that can now be seen below the undercliff walk between the Marina and Rottingdean at low tide.
1713 – 1722 Town collects funding from churches for sea defences

1723 First sea defences – groynes – raised from these ‘Church Briefs’ taxes. 2 wooden defences in the old town. At £8000 considered by Daniel Defoe to be ‘more than the whole town was worth’.

1795 Sea wall at Old Steine, built by proprietors of New Steine and East Cliff residents, is a simple flint structure

1824 First Brighton lifeboat established at Chain Pier. The toll-house was destroyed in a storm on 24 November.

1827-1838 Cement facing on the East Cliff. £100k for 2 miles. Rubble mounds to enhance sea defence which was extended between Old Steine and Royal Cresent in 1830-3. The sea defence was 23 feet thick at the base.

1833 and 1836 Chain Pier damaged by storms but repaired and re-opened.

1870 A new sea wall faced with stone from the first Blackfriars Bridge in London, demolished in 1863. Madeira Road laid out on the sea wall, using rubble from the old sea defences.

1870 – 1882 Planting of Japanese spindle and ivy along Maderia Road, including along the bottom of the East Cliff (the ‘green wall’), begins in this period. This was established at regularly spaced intervals, and trained with guide wires to grow up the cliff. The ‘green wall’ made the otherwise barren promenade a more attractive place to be, and a natural backdrop for riders on the future Volks Electric railway.

1882 Confirmed record of Japanese Spindle planting (Notes from J.R.B. Evison’s 1969 book ‘Gardening By the Sea’ records ‘Japanese Privet’ planted on the cliff face. Evison was Director of Parks at Brighton 1951 onwards. Evison notes ‘I have only seen it [flowering] on the cliff face at Brighton where plants set out in 1882 are some 60ft high…’). Hedges and lawns are present along the Madeira Terrace.

1883 Volks Electric railway opens, running from the swimming arch near the Aquarium to the Chain Pier.

1884 Madeira Lawns laid out, thanks to the acres of land reclaimed by Banjo Groyne, to provide additional recreational space and a more attractive seafront.

1890 Under the Brighton Improvement Act of 1884, Madeira Terrace [sheltered walk or ‘Colonnade’ and ‘Max’s Walk’], Madeira lift and shelter hall [now Concorde 2] were built. Terrace designed by borough surveyor Phillip Causton Lockwood, who also designed the Brighton ‘birdcage’ Bandstand which was built in 1884. In total 2,837 feet (864.7m) long. The shelter hall was designed as a cafe and waiting room.
“…each bay of the entirely cast-iron arcade has an identical elevation: round arches carried on single columns of a fanciful marine order; scalloped-arch intrados; spandrels formed by concentric rings of quatrefoils, forming a pierced sun screen; keystone cast to resemble either a female or a bearded male deity, perhaps Venus and Neptune.” (From English Heritage listing)
The terraces were also designed with a gap to allow the Japanese spindle plants to continue their climb up the cliff face. Seating was designed on the upper terrace, to sit proud of the ‘green wall’. The shelter hall lift was originally powered by water pressure, with the current electro-mechanical lifting mechanism fitted in 1930. The western terrace was added later.

1891 The Palace Pier construction begins. Designed by R St George Moore. A funding crisis caused a halt in construction, which was completed by Sir John Howard in 1901

1896 Daddy Long legs railway car ‘Pioneer’ opens 28 November. Tram by the Gloucester Railway Carriage & Wagon Company. Described as a mix between an ‘open-top tramcar, a pleasure yacht and a seaside pier’ for 160 passengers. Deck fitted out with an ornate saloon (complete with leather upholstered seats and exotic palms), promenade deck on top. Helmed by law by a sea Captain. 35 minute journey at 21/2d each way.

First London to Brighton horseless carriage run (the Veteran Car Rally) to celebrate lifting of law requiring man to walk in front of ‘car’ with red flag. Won by a steam car.

1905 First ‘Motor Race Week’, for which Madeira Road was tarmac’d. Led to annual National Speed Trials, every September since.

1940 Beaches closed in July, protected with mines and barbed wire, and reponed July 1945

2015 Marine Drive Terraces are closed to the public due to concerns over the safety of the structure. Management of the green wall by partnership of Building Green and B&HCC continues on the ramp between Madeira Drive and eastern Marine Parade. The first new ideas for the future of Madeira Terraces are drawn up by local planner Michael Doyle, and discussed  in private talks between developers and the Council.

These postcards are the first I’ve seen that show green walls West of the pier, by the Metropole and Grand Hotels. Looks like ivy. A new addition to the green history of Brighton (and Hove) seafront.

Anyone shed any light on this?

The beach and Kings Road, Brighton 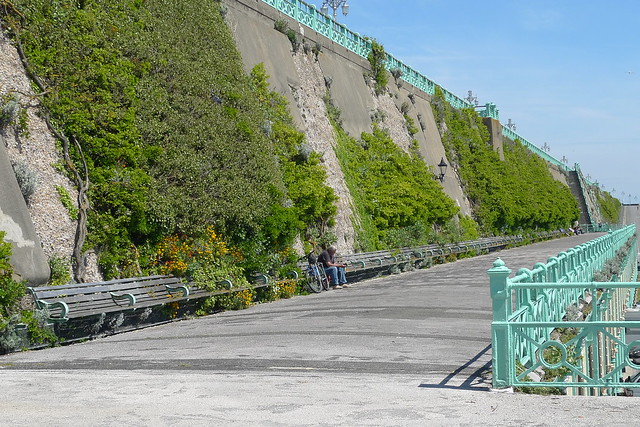 The Brighton skyline could become fields of green as environmental experts have identified 87 football pitches worth of roof space perfect for grass and flowers.