We know that some parts of Brighton & Hove are ‘risky’ when it comes to flooding and depaving may provide part of the answer. Don’t worry, we aren’t advocating digging up the whole city!

Building Green was speaking on the subject recently at a Hove Civic Society meeting, and reflecting on the July 2014 floods – 100 properties flooded in Portslade and 300 emergency calls to East Sussex Fire and Rescue in a single morning. Now, this is ‘surface water flooding’ we are talking about – the kind where very heavy rainfall runs and collects in the hollows in the hard surfaces in our towns and cities.

Cities tend to be impermeable places – and we know that where we can increase permeability at scale, for example through landscaping, retaining front and back gardens, green roofs and other ‘sustainable drainage’ approaches, we can reduce the risk of flooding.

Come and learn more about it all this weekend – and how you can help by ‘doing it yourself’ at the workshops run by Building Green, Organic Roofs and Brighton Permaculture Trust. Not too  late to book a place!

Green roof on the Velo cafe, The Level, Brighton

Portslade is home to two of the first ‘rain gardens’ in Brighton & Hove. Building Green and partners have completed a study that has found enough flat roofspace in 9km2 of central Brighton – 87 football pitches worth in fact – to hold back 100 Olympic swimming pools of rainwater that our street drainage networks might struggle with during heavy rainfall events.

As we’ve reported before, there are other places that do this much, much better. Let’s learn from them. 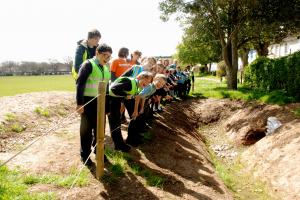 One such place is Portland, Oregon – and in this blog Dusty Gedge writes about a new initiative to ‘depave Portland’ – ripping up the hard surfaces and planting stuff.

Good for sustainable drainage – but also good for visual amenity, and even crime rates potentially. A study in Chicago Illinois in 2001 in one public housing development found that robberies were down by 48% and violent crime by 56% in areas where buildings had been ‘greened’ with green walls and landscaping. Poster below. Those are big numbers – what if we could achieve 1 or 2% – still worth doing? Building Green thinks so.

Use the 'contact us' page to get in touch if you can help promote green roofs and living walls. Every contribution counts!