Understanding the age and history of the green wall at Madeira Drive is taking some research! Comments and materials welcome…here’s what we understand so far.

Beorthelm’s-tun, by now ‘Brighthelmstone’, remained a small fishing village (population circa two thousand) until the 1780s. The first sea defences were erected in Brighton in 1723 (funded from the first local taxes), and Georgian Brighton developed from 1780.

So for the first half of the 18th Century, and certainly before that time, the East Cliff can be considered relatively ‘natural’. It may have looked similar to West Beach at Newhaven, shown below, with erosion and colonisation by a range of native coastal plants.

Plants, almost certainly established naturally, are visible on the East Cliff (if you squint) as shown in this Constable painting of the Royal Suspension Chain Pier dated 1824-27 . Kemptown development begins in 1823.

The book ‘In the news Brighton’ confirms that the East Cliff was faced with cement between 1827 and 1838, shortly after Constable’s painting. This ‘splendid and useful structure’ cost £100,000, stretches for 2 miles, and is composed of ‘concrete cement…boulder stones, lime and sand’. More at My Brighton & Hove.

According to Measuringworth.com that’s about £8 million in today’s money in terms of relative purchasing power.

Madeira Road (later Drive) construction begins in 1870. It would make sense to think that the planting took place at or after this time.

However this painting from the 1870s shows the plants already well established.

Notes from J.R.B. Evison’s 1969 book ‘Gardening By the Sea’ records ‘Japanese Privet’ planted on the cliff face in 1882 at least. Evison was Director of Parks at Brighton 1951 onwards. Evison notes ‘I have only seen it [flowering] on the cliff face at Brighton where plants set out in 1882 are some 60ft high…’

If that’s right, then Spindle – on Brighton seafront at least – grows at almost one and a half feet a year! 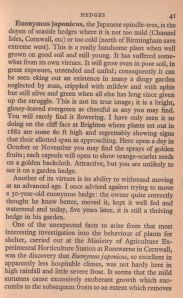 Looking for clues in botanical circles hasn’t helped much either yet. The GB Non-Native Species Secretariat incorrectly states that Japanese Spindle (the plant well established on the cliff now) was first recorded in the UK in 1897. Evison shows was here at least 25 years earlier, and this text has it introduced in England in 1804!

A nice later picture dated between 1883 and 1896 showing the planting well established on the rendered cliff face (and the old aquarium clock tower!). East from the Sealife Centre

Safe to say we’re not certain – not from this evidence at least. Again, shout if you know something we don’t!

Best (vague) date for a Japanese Spindle-based wall is mid-19th Century, if pushed then I’d go for 1870. But there has certainly been cliff vegetation on this site since work began on the Kemptown estate in 1823, and earlier through history as a natural part of the South coast seaside.