Good article here by Lee Evans, Director of Organic Roofs, on why so many Sedum green roofs struggle.

Unfortunately the many Sedum green roofs in Brighton are struggling too – for example those on Council buildings such as Whitehawk Children’s Centre and library, private buildings like the Smart House on Ditchling Road and the American Express HQ in Kemptown, and schools like Downs Junior.

The good news is that any struggling green roof can often be given a whole new lease of life by adding additional substrate, and establishing some more suitable plants.

Better still to get it right first time!

The new Amex building was opened to great fanfare in 2012.

Many of these are undoubtedly worthwhile (the result was a BREEAM Very Good), but the biodiversity features are, sadly, dead.

‘Green walls’ at the back of the building were tokenistic pre-grown ivy stands and have all withered and died, possibly due to a lack of irrigation. Judging by the aerial views you can glimpse if you watch ITV’s new police documentary ‘The Nick’, the small green roof has also died or is dying. 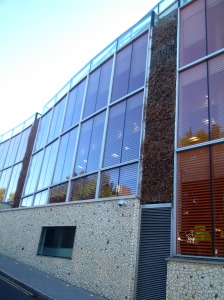 Meanwhile the green wall planted by the Victorians at Madeira Drive is still thriving at 130 years old, and the Crew Club green roof is going strong at over 10 years old.

All of this points to the value of a good specification, clear planning conditions, no skimping on the budget, and a maintenance programme. The green roof won’t be visible to many, but the walls now let down the corporate image and will surely need replacing.

Perhaps American Express could get in touch with Building Green for advice?

Biodiversity: Green roofs and living walls are located in a number of locations, some of which were a request by the planners, and these include green walls which can be easily seen from street level. The roof areas include 15 bird boxes in specific locations. 20 new semi-mature trees have been planted within the site and neighbouring school grounds as part of an improved biodiversity and ecological target. The site prior to the building works contained at grade car parking and two small scale buildings, and an ecological survey found no presence of bats or other protected species. Monitoring will be carried out by the FM team once in full occupation.